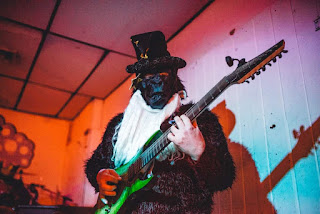 
Gorilla Wizard is a sludge metal band from Long Island New York formed in 2018 featuring members of Kaiju Daisenso and Favoritje. Born as a side project between friends, Gorilla Wizard morphed into a full band when the members all decided metal music takes itself too seriously and wanted to make serious music, but have as much fun as possible.
Gorilla Wizard was originally formed with Favoritje drummer Mike Castillo and 1400 year old Gorilla Wizard, Bertrum, as an outlet for crushing groovy riffs. Ryan Markoe joined in on bass and a band was formed. The addition of Kaiju Daisenso’s Gabriel Saladino cemented the idea of  a full-time vocalist and were ready to take it to the next level.
The result is the debut album Tales from the Cauldron, a collection of heavy and melodic songs that explore absurd ideas with a big bombastic groove. Tales From The Cauldron  will be available on all major streaming platforms, CD, and cassette beginning August 23rd. Preorder at GorillaWizard.net Gorilla Wizard is a heavy, fun, and raucous good time.
Follow Gorilla Wizard on
Instagram
Facebook
YouTube